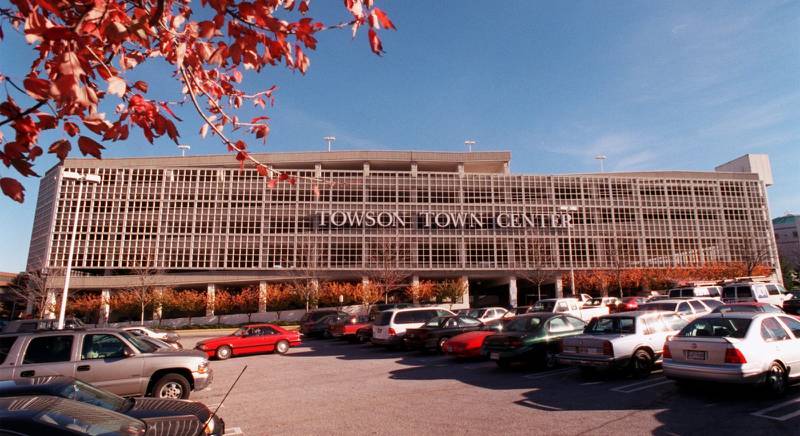 Towson Town Center sits at the heart of the Towson community—positioned perfectly at the crossing of York Road, Dulaney Valley Road, and Joppa Road. Whether you’re a newcomer simply passing through, or a local resident, the massive shopping mall is hard to miss.

Standing four stories tall and decorated with luxury brands, fan-favorite retailers, and delicious dining spots, the center is located in a very walkable part of town—making it an ideal destination for people to shop, eat, and enjoy each other’s company.

Did you know the Towson Town Center we all know (and love) was originally called Towson Plaza? The structure was built in 1959—on land from Goucher College—by DeChiaro Properties. The company’s founder, Ralph DeChiaro, was the father-in-law to the late Larry Rachuba and grandfather to the Rachuba children—Ray Rachuba, Kim Rachuba Williams, Theresa Rachuba Leatherbury, and the late Chris Rachuba—with Ray and Theresa co-owning and leading our company today.

DeChiaro Properties not only constructed the then 2-story building, but the company owned the historic shopping plaza too. After its grand opening in the spring of 1959, many flocked to Towson Plaza to experience one of the very first multi-level, open-air shopping malls in the area.

1960s – A Special Guest Visit and the Merging of Two Families

In 1960, a few short years after the initial opening, Towson Plaza was selected to be a stop on presidential candidate John F. Kennedy’s campaign route. This historical visit brought even more people from across the state to not only hear the soon-to-be president speak but also enjoy the perks of the shopping destination.

Members of the DeChiaro family, as well as Larry Rachuba, were present for Kennedy’s remarks, which made for a significant moment for DeChiaro Properties and both families. Shortly after, in 1961, Larry married into the DeChiaro family, and in 1964 he accepted Ralph’s offer to join DeChiaro Properties. After years of land development for thousands of homes, offices, apartment complexes, and additional shopping centers across the region, the DeChiaro-Rachuba Group was born.

As Towson Plaza continued to blossom, important modifications were made to keep up with the changing times. The collection of stores, where people had to walk outside to get from most shops to the next, were soon updated to an enclosed and expanded building.

Larry Rachuba led the great expansion of Towson Plaza. His team worked in phases for its construction, adding new stories to the building’s original structure, which brought in new vendors and restaurants and encouraged department stores like Hutzler Brothers and Hecht’s to join the newly updated and renamed Towsontowne Centre.

In 1990, the DeChiaro-Rachuba Group partnered with the center’s co-owner, the Hahn Company, to transform the Towsontowne Centre into the Towson Town Center that we know today. The shopping destination was expanded by adding over 100 new stores and updating its interior and exterior appearance.

After the noteworthy transformation was complete, the family and Trizec-Hahn Corp. (formerly the Hahn Company) transferred ownership of Towson Town Center in 1998 to the Rouse Company. Even though they no longer own Towson Town Center, the DeChiaro and Rachuba families continue to take pride in knowing the property is still the cornerstone of downtown Towson.

A Look Into the Rachuba Archives

With history that spans three generations, there’s more to share about how our company got to where it is today. Make sure to follow us on Facebook and LinkedIn so you don’t miss our next look into the past!